Welcome to EnglishForum.com!
Are you ready to improve your English? Sign up free today!
Sign up
You are using an out of date browser. It may not display this or other websites correctly.
You should upgrade or use an alternative browser. 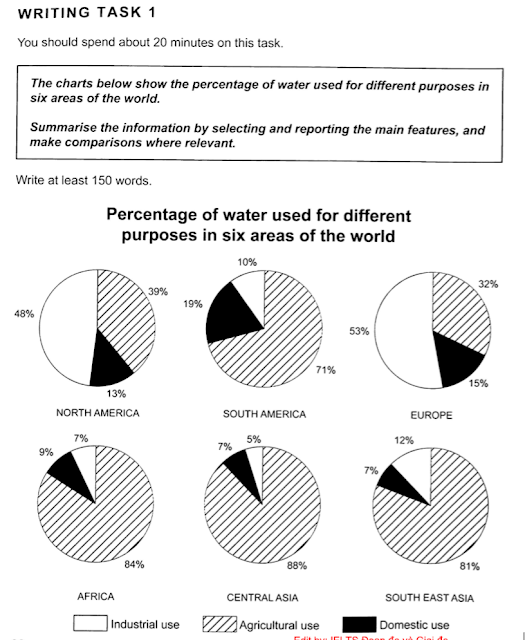 The pie charts illustrate the proportion of water consumed for various reasons in six places of the world.

Overall, water is mainly used for agriculture in all areas, except North America and Europe, while other kinds of water consumption witness varieties.

In the countries of Europe and North America, people consume water for industrial purposes more than in any other area, at 53% and 48% respectively. The percentages of the other locations were far less, combined just 32%.

Water usage for farming was the most popular in Central Asia, Africa, and South East Asia with a very large majority. South America’s rate was just over seven in ten. North America and Europe used water for farming least in all, with 39% and 32% respectively.

Water consumption for domestic purposes is at the lowest rate of all places, except South America. It has just under %10 in three areas and other places have around 13% and 19%.